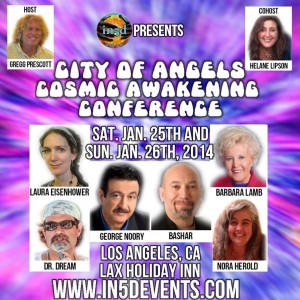 On January 25-26th, 2014,  In5D hosted the City of Angels Cosmic Awakening Conference at the LAX Holiday Inn  in Los Angeles, California as they united soul groups, soul families, starseeds and lightworkers throughout a weekend of magic and fun!

George Noory is an American radio talk show host. As of 2010, he is the weekday host of the late-night radio talk show Coast to Coast AM. He is heard across the United States and Canada on many AM and FM stations as well as on XM Satellite Radio. His show is one of the most listened to overnight programs. The program is syndicated by Premiere Radio, a division of Clear Channel Communications.