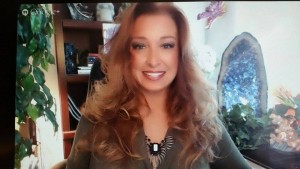 Kelli Coffee is the creator of the YouTube channel, Kelli In The Raw. She owns and manages Kelli On The Rocks, The Raw Revolution, Chef In A Bottle and Kelli Coffee.com. She started her career in television as a host for travel shows and transitioned into the role of spiritual teacher and mentor on YouTube after having a near death experience in 2010.

Kelli was born with abilities to see into other dimensions, know the future, alter people’s minds, remote view, heal, read minds, and much more. Growing up in the church taught Kelli to hide her abilities. It was fortunate her mother believed her. After experiencing horrible visions of planes crashing into buildings, loved ones dying, and unable to control her abilities, Kelli shut them down for several years until a friend accidentally helped her to see her first aura. After that she was hooked. She learned how to get her abilities back and develop even more. She started teaching this to everyone who would listen. The children seemed to be the ones who learned more quickly and adapted to controlling their abilities better.

In August of 2010 Kelli died after experiencing complications from a surgery. Her husband was by her side the two minutes she stopped breathing. After the experience her psychic abilities exploded. She was able to do things that had no name to describe. She saw the traps that were used after death to capture people, later recycling them in a form of reincarnation. She knew how the universe worked. For the past 6 years she has been teaching on YouTube about what lies beyond these bodies. Recently she has started conducting personal sessions where she teaches clients to remove alien implants, blocks, programs, entities, chakras, and to move emotions. She teaches clients how to expand their level of awareness and harness the energy for healing. She occasionally talks to dead people, but prefers to teach other how to do it themselves.

Kelli tours the world holding workshops and speaking at events. Her goals are to empower the individual and give them the tools to become independent. She is currently writing her first book, “The Day I Died and Started Living.”